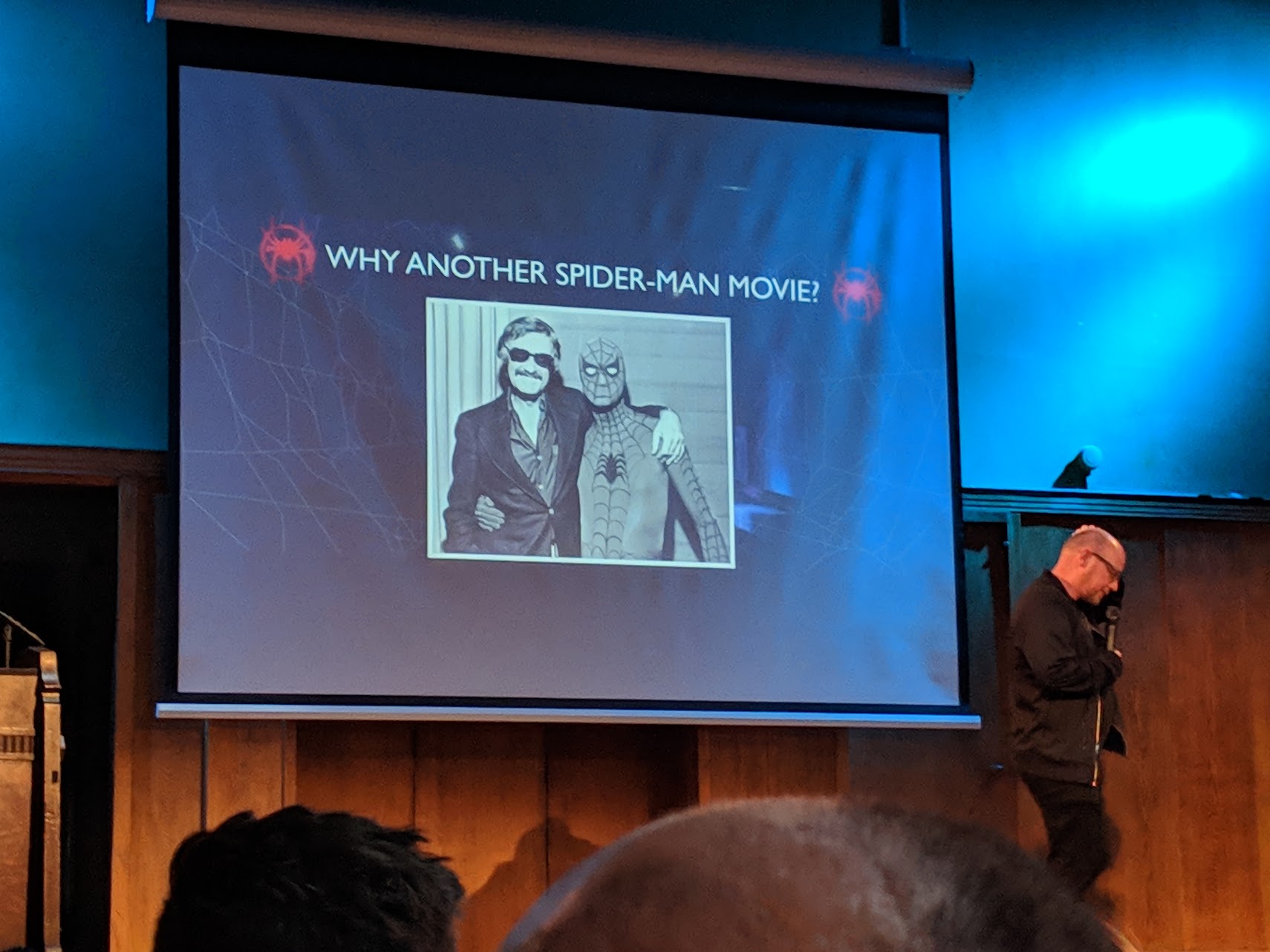 Above, Justin K. Thompson, the production designer on Spider-Man: Into the Spider-Verse talks about the experience of creating the film at the brilliant The Story conference this week.

The Story is pretty much the only conference I try and attend every year, and as this year was the 10th anniversary there was no way I was going to miss it. It was a fantastic day with some awesome speakers. My personal favourites were Alison S.M. Kobyashi talking about her performance, Say Something Bunny, and the brilliant and hilarious Sara Wajid (Head of Engagement at Museum of London) talking about cultural diversity, museums and ‘bounce’.

Also this week I managed to work my way through Netflix’s new superhero show, The Umbrella Academy. I didn’t read the original comics, but I liked the take on post-Watchmen/postmodern ‘heroes are real people too’ trope, and the production design was lovely. Plus, a Tiffany dance montage! What’s not to like.

Some other visual treats for you from this week…

This beautiful little video essay from the streets of NYC, about photographer Patrick Barr aka ‘Tiger Hood’ the urban golfer:

I read another interview with Steven Soderbergh this week, this time from The Atlantic. Always read Soderbergh interviews, that’s one of my principles 🙂 .

I don’t write much (anything) about clothes here, even though I do find fashion pretty interesting (even though I don’t really like using the term ‘fashion’). I’m an avid follower of the blog Put This On and they just published this article on the genesis, history and current state of Esquire and GQ (combining my interests in fashion and magazine publishing, hurray).

I seem to have read a lot about the internet and the state of digital culture this week, and not a lot of it is cheery.

The always-interesting Caterina Fake (co-founder of Flickr) wrote about why Thoreau was a technophile, and ended her post with a now pretty common sentiment that what was first joyful and revolutionary about the web has been degraded and we should seek to get back to it somehow:

This is what I first loved about the internet: it connected us to each other. We love to connect! But we’re not communicating any more. We went past Dunbar’s number, beyond the number of people we can meaningfully know, which makes our relationships brittle and thin. Fake news, platitudes, bias, and not seeing our friends anymore– just reading their updates–is what it’s come to.

This passage from Thoreau tells me three things: One, we should not forget the wonder of being able to communicate with one another across great distances. All the wonders of the internet are still there: we should see it again with it’s magic. Two: we should pay attention to the past to learn for the present. And three, living as we do in Thoreau’s future, where we can see the future outcomes of those telegraph wires, we should think deeply about the future we ourselves are creating and guide it to a better, more beautiful, future.

Then there’s this by Hossein Derakhshan, who spent six years in prison for blogging in Iran, in which he states: ‘The rich, diverse, free web that I loved  —  and spent years in an Iranian jail for  —  is dying’, before asking ‘Why is nobody stopping it?’.

This essay by curator and journalist Sarah Burke isn’t about the internet per se, but her “investigation of authorship, community, and the value of informal collaborations” got me thinking a lot about my initial attraction to online communities, and how they served as a gentle and safe way for me to meet so many new and interesting people. I always tried to create those feelings for other people in a lot of projects I was involved in (from Londonist, to Qype, to Documentary Club), but as the web evolves into something that is no longer collaborative and personal and communicative, I feel like that is becoming so much harder and that’s a big cause of regret for me.

And talking of online communities, The Atlantic wrote something depressing about the campaign to take down Fuck Jerry and The Limits of Extremely Online Organizing.

Away from the internet for a bit. The Paris Review published a great, really personal essay about the documentary feature Minding The Gap, which I watched a few weeks ago and really enjoyed.

Wired had this great article (from last year, but I only just saw it) on Elizabeth Holmes (of Theranos infamy) and her place as the first feminist antihero.

And Buzzfeed published this tremendous piece of longform crime journalism about, “Tomi Masters… a 23-year-old from Indiana who moved to California with dreams of making it big in the cannabis business. Then she met a hacker who introduced her to a dark new world of digital manipulation, suspicion, paranoia, and fear — one that swallowed her alive and left her floating in a river in the Philippines.”

I’ll leave you this week, with this a beautiful new track from Tim Hecker: